Safeguarding the Health of our Rivers & Wetlands

Professor Richard Kingsford has been involved in the surveying of waterbirds in rivers and wetlands since 1986 and his research has had a profound impact on water management practice in Australia and overseas.

Specifically, his research has enabled the development of effectiveness indicators which have been adopted by government agencies as part of water management plans for several major Australian wetlands. This includes internationally important wetlands listed under the Ramsar Convention (for example Macquarie Marshes) and water systems including the Murray-Darling and Lake Eyre Basins.

Waterbirds are used as a flagship group for monitoring as they can reflect major changes to the health of an ecosystem. For example, trends in fish-eating waterbirds can help track changes in fish populations.

Alongside other indicators researched by Kingsford and colleagues (for example frogs, invertebrates, flooding regimes and vegetation), examining the responses and trends of waterbirds provides a way of charting long-term changes in different parts of an ecosystem, at different spatial scales i.e. wetland, river and basin.

Kingsford, who has been the Director of the UNSW Centre for Ecosystem Science for more than a decade, has long been a vocal advocate for better water management practice in Australia. In addition to his work with government decision-makers, since the mid-1990s he has contributed expertise to community efforts to protect rivers.

For example, he has been spokesperson for and facilitated the successful Lake Eyre Partnership, which brought together Indigenous communities, conservation groups, landholders, tourist operators, and scientists, as well as oil and gas interests, to develop a more holistic understanding of the Basin’s biophysical, social, cultural and economic value.

In 2015, the Lake Eyre Partnership was awarded the International River Prize for their success in preventing ecological damage to Cooper Creek. This was the first time the prestigious prize had been awarded for protection, rather than rehabilitation, of a river. This is significant because all too often, funds are directed to projects where the damage has already been done. Like many things, prevention is better than cure in water management practice.

The publicity around the award resulted in a twinning program with the Okavango River Basin (in Botswana, Namibia and Angola), which is now using a methodology for measuring the health of water systems based on the successful translation of Kingsford’s research into the Okavango context.

The usefulness of Kingsford’s waterbird data for pinpointing trends in environmental health was shown again in the internationally-acknowledged assessment that wetlands in the Murray-Darling Basin are ‘critically endangered’. This assessment was made using the Red List of Ecosystems methodology, developed at the Centre for Ecosystem Science and adopted by the International Union for Conservation of Nature.

Kingsford’s research has also been incorporated into the drafting and implementation of the Murray-Darling Basin Plan where waterbirds were identified as one of three major indicators of the plan’s effectiveness.

Water management is a highly controversial topic with much at stake. UNSW researchers have had a significant impact on water management practice and policy in both Australia and overseas and their expertise and global standing will ensure they continue to do so well into the future. 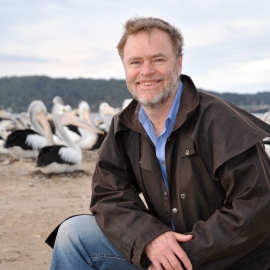