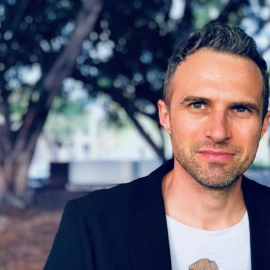 Joel Pearson is a Psychologist, Neuroscientist and public intellectual working at the forefront of science, innovation and agile science.

Joel is a National Health and Medical Research Council fellow and Prof. of Cognitive Neuroscience at the University of New South Wales, Sydney Australia. He is the founder and Director of Future Minds Lab (UNSW), a multidisciplinary agile Cognitive Neuroscience research group that does fundamental research, consults with companies, artists and designers on brain science  - a world first, hands on human-centered research lab working on the Psychology and Neuroscience of innovation and entrepreneurship, the future of work, human and AI interactions, applying nudges for good, mental health of company founders, Pearson also heads up MindX a boutique company that was spun out of the lab in 2016 to apply psychology and cognitive neuroscience to the world of advertising and marketing.

Joel started his career studying art and filmmaking at one of Australia’s top fine arts school, Collage of Fine Arts, University of New South Wales. However, he then decided to apply his creative discovery techniques to the scientific mysteries of human consciousness and the complexities of brain. He completed his science PhD in 2 years, while fitting in several around the world trips and invited conference and university talks, alongside several publications.

Joel’s research has been recognised with major accolades including the 2009 William James award for the greatest scientific contribution to understanding consciousness. His team’s efforts have been featured in The Huffington Post, The Sydney Morning Herald, The Australian Financial Review, LiveScience, Discovery Channel, BBC and a host of other major media outlets.

Recognising that the most exciting and surprising scientific discoveries of the 21st century will likely involve a high number of accidental breakthroughs and large amounts of rapid iterative pilot testing. Joel is a passionate proponent of high-risk discovery science and has developed a method called Agile Science, a practical guide to both practicing and reporting scientific discoveries – the ‘Lean Startup’ for the world of science.

Joel takes a multidisciplinary agile approach to running his lab, bringing in staff and students from art, architecture, mathematics, computer science, psychology, neuroscience and medical imaging. The group studies many different exciting and cutting-edge topics, from new methods to map the human brain, treating mental illness, how to boost the human imagination and decision-making, to cognitive biases in financial risk assessment.

A prolific writer and speaker, Joel sits at the intersection between science, innovation and art.