As well as his enormous impact on the public's understanding of physics, the late Stephen Hawking had a special connection with UNSW.
UNSW Media | UNSW Newsroom 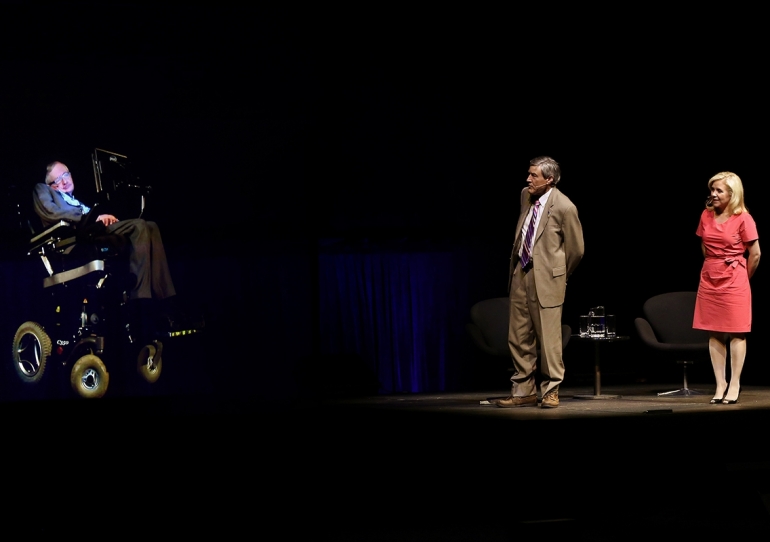 UNSW Sydney has paid tribute to scientist and author Professor Stephen Hawking following news of his death at age 76.

The physicist and author of A Brief History of Time died peacefully at his home in Cambridge in the early hours of Wednesday morning, according to a statement from his family.

UNSW quantum physicist and 2018 Australian of the Year Professor Michelle Simmons said: “He was an extraordinary man who prevailed against all odds. Physics will miss him greatly.”

Professor Hawking was a board member of the Big Questions Institute, a multidisciplinary research centre established at UNSW in 2015 to investigate the big questions of science.

He and his daughter Lucy, a renowned author in her own right, were awarded the 2015 UNSW Scientia Medal for Science Communication.

Both appeared at a sold-out public lecture organised by the Big Questions Institute, Cisco and the Sydney Opera House, with Professor Hawking appearing via hologram from the University of Cambridge.

Lucy Hawking said it was a very great honour to receive the UNSW medal and to share it with her father.

She described the Opera House event as a “magnificent fusion” of cutting-edge technology, science, and the world of the arts, adding: “I have never participated in anything as outstanding or as memorable.”

The medals were presented by Professor Merlin Crossley, then Dean of Science and now Deputy Vice-Chancellor Academic.

“His impact on the public understanding of physics was extraordinary, inspiring people around the globe with his knowledge of the nature of the universe, black holes, general relativity and his quest to find a Theory of Everything,” he said.